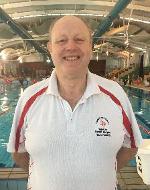 David Murphy is a Silver Licence accredited coach who has a Graduate Certificate in Applied Science (Sports Coaching) from the University of Queensland and a Certificate IV in Training and Assessment.

David commenced his participation as a parent and technical official over 30 years ago.  He is a former president of Telopea Swim Club and was ACT Competitions Director twice for a number of years.

David has coached swimmers to Country, State and National medals with several Vikings swimmers and relay teams holding NSW and ACT records. He had swimmers selected for 4 years in a row onto the NSW State Teams squad and has numerous swimmers in the NSW Junior Sharks, Age development and Emerging Talent Squads over the last 8 years.

In 2015-16 David coached the team to third place overall in NSW for the summer season, the highest ranking of an ACT club this century.

David enjoys seeing young people improve their swimming over the long term and how it aids their school results and productive adult lives.

His favourite TV shows are British and Scandinavian crime dramas and his taste in fiction books is the same with the addition of spy novels. 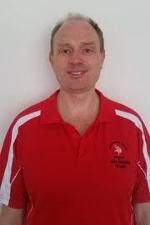 Jaan Murphy started coaching in 1995. He is a Silver Licenced Coach at holds a Masters of Applied Science (Sports Coaching) from the University of Queensland and Diploma of Sport (Development) from Loftus TAFE. He currently works as the Casual Senior Coach, coaching the Gold and Silver Squads when required and mentoring the junior coaches.

Jaan has coached in both Australia and overseas, including in Singapore and the United States. Locally, Jaan previously worked as the Head Coach of the Brindabella, Tuggeranong Vikings and Ginninderra swim clubs. He has coached numerous medal winners at the Australian Age, NSW Open, NSW Age and Country levels. Jaan coached a number of Australian Open finalists, some of whom went on to represent Australia in various competitions.

Jaan has also coached international representatives for Singapore and other countries.  Jaan coached swimmers that have won medals at international competitions such as the World Cup series and Oceania, as well as appearing in World Championships, Commonwealth Games (including semi-finalists), Olympics, South East Asian Games, South Asian Games and Asian Age Group Championships.  Many of the swimmers he coached overseas won medals at Australian Age, Queensland and NSW Championship competitions when part of Singaporean representative teams.

Whilst Jaan exited full-time coaching in 2012 to become a lawyer, he continues to have a passion for the sport and enjoys seeing young people learn valuable life lessons from swimming and the pursuit of their swimming goals. 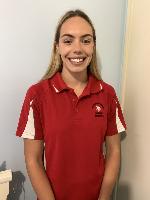 Courtney Taylor started swimming in 2010 and has since progressed to coaching, currently coaching development, junior and bronze squads at Tuggeranong Vikings.

Courtney is currently studying a Bachelor or Politics and International Relations/ Bachelor of the Science of Psychology at the University of Canberra.