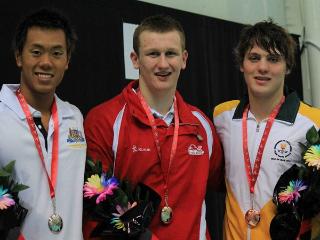 Congratulations to Eugene Tee who recently represented Australia at the 2011 Commonwealth Youth Games at the Isle of Man.

The Commonwealth Youth Games has been a launch platform for many Australians that have gone on to achieve success at World Championship and Olympic levels.  As part of a contingent that represents the future of Australian swimming, Eugene had an outstanding meet earning 2 Silver medals (200IM and 400IM) and a Bronze (1500 Freestyle).

As a club we are very proud of Eugene and wish him continued success as he pursues his dream.