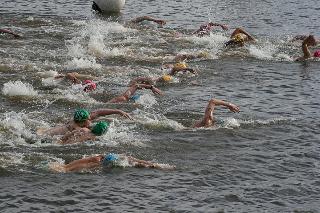 The 2011 Victorian Open Water Championships (5km and 10km events) and the non-championship 1km and 3km events were held at the Hazelwood Pondage on 15th/16th October.

Surrey Park was well represented on both days of competition and well supported by coaching staff and parents.

The next event was the 1km non-championship event.  Surrey Park was again amongst the medals:

Saturday’s competition concluded with the non-championship 3km event where some of the club’s younger swimmers showed us their talent.  Medallists were:

The 10km event was held on Sunday and nine Surrey Park athletes started the race.  Not long after the lead swimmers had completed three-quarters of the race, the weather conditions rapidly deteriorated and visibility on the water was severely degraded.  In the interests of safety  the race was abandoned and the swimmers recovered from the course. Based on the positions of the field at the time of abandonment, the Referee was able to declare race positions relative to age/gender.  Surrey Park swimmers' positions were:

Congratulations and well done to all swimmers that competed.  Open Water Swimming is a challenging and uniquely demanding event.  The experience of the weekend will stand our swimmers in good stead for future campaigns.

Photos from both days of competition are available in the news section for members to view after logging on.