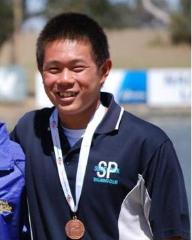 Surrey Park Swimming Club congratulates Mun Hon Lee on his joining Boston University.  Mun Hon, a great role model for younger swimmers, learnt to swim at the Surrey Park Swim School and then graduated to the club ranks where he progressed through all levels up to the National Squad.

Mun Hon is enrolled in Boston University's Sargent College of Health and Rehabilitation undertaking a speech, language and hearing sciences major and will swim for the Boston University "Terriers" Swim Team as a Free/Fly/IM specialist.

Well done Mun Hon - we are proud of your achievements.