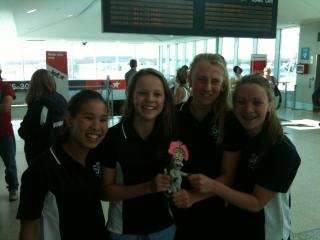 As essential preparation for next year's Australian Championships, a team of Surrey Park athletes travelled to the Sunshine Coast for the recent Queensland Open Water Championships at Lake Kawana.  This meet exposed the team to a variety of race elements and conditions that will directly assist their physical and mental preparation for what they are likely to encounter at Lake Macquarie in 2013.
The team arrived on Friday and spent the day with a training session at Cotton Tree and dinner at Augello's ( a new tradition).  An early turn-in was the order of the day with an early start required for the next day's racing.
The boys were first up and achieved some fast times.  Max Warrick was not only able to achieve a national qualifying time for the 5km event but also secured a bronze medal in the Boys' 14 years event in the process.  Sam Warrick picked up third in the Men's 17-18 years 5km and Hamish McDougall grabbed silver in the Boys' 15 years 5km.  Tom Golding, swimming his first 10km event, charged on to breeze through for a national qualifying time and a bronze medal in the Boys' 15 years 10km event.
With the boys done and dusted, it was time for the girls (aka 'the penguins' except for Phoebe who insists she is 'Mort') to get into race action.  It was a race the girls needed to have and well and truly exposed them to hard, physical racing.  The girls all swam well with Adelaide Wood winning the Girls 12-13 Years 5km event.  Any signs of distress were later quelled by a body surfing session and a recovery ice-cream.
On Sunday, prior to departure there was time for another training session with a run along the coast at Noosa followed by a long swim to shore during which it became obvious that penguins do not like sea-lice.  A quick deck change followed by a trip back to the airport and a smooth return to Melbourne brought this successful trip to its conclusion.
Well done team on your behaviour (which was positively remarked upon by members of the public) and for your attitude.  Special thanks to Mike and Kylie for their efforts over the weekend.